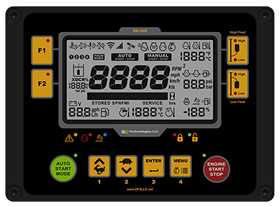 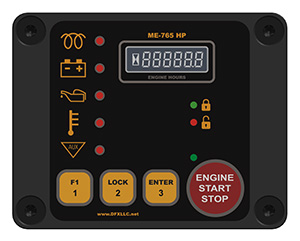 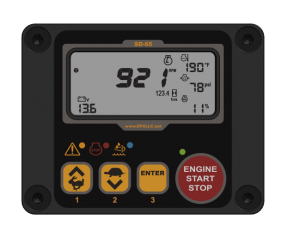 The SD-65 is DFX’s entry level engine controller for electronically controlled J1939 engines requiring simple engine start/stop in a compact form factor. This low-profile controller measures only 2.77” x 3.52” x 1.5” and will easily install into a 2.55” square opening. The SD-65 is housed in a heavy-duty anodized aluminum enclosure which is encapsulated with an industrial potting compound making the SD-65 weatherproof and resistant to vibration. The SD-65 is ideal for smaller engines; however, the SD-65 has technology to easily control larger more sophisticated engines.

The sunlight readable LCD is optically bonded with an anti-glare coated strengthened glass for optimal clarity and durability. The SD-65 LCD display uses both segmented liquid crystal and dot-matrix technologies. LCD displays engine parameters, fault codes as well as plan text descriptions for menu descriptions, engine fault codes and the ability to display custom parameters. Each LCD display is equipped with RGB backlight LEDs for night vision. LED backlight color can be easily configured via the menu system to the customer preference.

The SD-65 unique modular design simples wiring by utilizing a single CANbus extension cables with M12A waterproof connectors. These plug and play cables consist of a power, ground and shielded CANbus J1939 wires which can be extended up to 100 meters away from the engine. When utilizing our splitter connectors adding additional CANbus based products such as IO module modules, audio buzzers, keypads, wireless remote control or even telemetry modules an easy task. 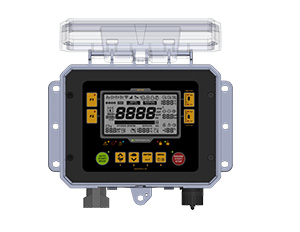 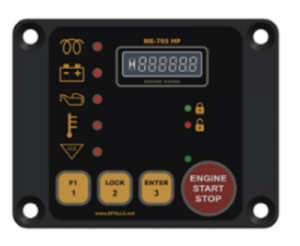 The status of all typical engine systems is displayed with LEDs. Each status input can be configured to be display only or monitor and shutdown the engine when it faults. Switch inputs are all configurable to be faults when open or faults when closed. It shuts down the engine and shows the reason for the shutdown for OIL PRESSURE, TEMPERATURE, ALTERNATOR, and two AUX Inputs.
For application requiring engine start protection the SD-65 can be enabled in software to utilize a passcode number to start the engine using the buttons on the front panel.

LEDs on left side of the ME765-HP shows preheat activation timing indicating when to start engine and status of the switches installed on the engine; battery charge, low oil pressure switch, high temperature switch and two auxiliary switches. All normally closed switched inputs which in most case will be the alternator charge (Battery Symbol) and oil pressure (Oil Can Symbol) will be lit solid after LED self-test. When engine is started the controller will ignore all shutdown inputs for 10 seconds so that the engine can build up oil pressure and for the alternator to start charging. After 10 seconds from the time the starter motor disengages the ME-765-HP will start monitoring inputs. When the controller senses a switched input while the engine is running the engine will shut down and only one LED will be lit indicating the exact failure (first Fault Indication). In some cases, the controller may be programed as indication only and no shutdown or no shutdown for battery charge which is a noncritical failure for the engine to shut down. For the engine to shut down the controller need to sense the input for .5 seconds before the controller recognizes the input as a shutdown.
The ME765-HP will have passcode pin protection to prevent unauthorized access to starting the engine. Lock/Unlock status is indicated on the front panel with Red and Green LEDs with corresponding Lock and unlock symbols. If the controller is locked the operator will be required to enter a 5-digit pin using the 1, 2 and 3 buttons on the bottom of the controller. An example pin could be 11321. If the incorrect pin is entered after the 5th digit the LOCKED symbol will blink red. PIN can be from 0 to 10 characters in length. A press of the Run/Stop button erases any PIN digits in process and permits user to re-start the input process. The LOCKED LED will blink if user presses more than 6 digits when entering the PIN. The controller will go to sleep if user continues to enter digits. If the correct pin is entered the UNLOCKED symbol will light up green and the RED LOCKED symbol will turn off. Controller will stay unlocked until the lock button #2 is pressed which manually locks the controller or the configurable “unlocked” time expires. The Green UNLOCKED LED will be on any time the controller is unlocked.

The microprocessor-based solid-state design uses semiconductors instead of outdated electromechanical relays to ensure reliable high current switching.
The ME765-HP allows each system to be field programmed and configured to suit the customer’s unique requirements. Parameters are programmed using an easy to operate configuration program from virtually any laptop or computer.